Nagesh Nadar is someone who has inspired me, though he is not a friend or dear one. He is an ordinary person -a vegetable seller in Chembur. As a poor thirteen year old boy, he helped his father Pichamani Nadar hawk vegetables in Chembur, Mumbai. His younger brother Suresh
joined him in this trade a few years later. In 1983, Pichamani Nadar passed away.

In 1990 I met Suresh and Nagesh for the first time. They were sitting under a neem tree on the main station road in Chembur, selling vegetables. What I liked about Suresh was his cheerful nature and the efficient business acumen and marketing skills that he exhibited even
at that time. He was always kind and good humoured. His older brother was quieter, but good at handling bills. Both the boys were extremely hard working.

In nine years,Suresh’s open air stall under the neem tree grew and bloomed, and became almost like a supermarket, with all the vegetables neatly arranged in blue trays. He even brought mushroom, basil leaves and broccoli and sold them from under that tree! It was a
terrific effort, and I felt he was undoubtedly a visionary, as only few are. “Mark my words – he will own a supermarket tomorrow,” said I to my daughter, one day.

Some months later, we saw chopped vegetables in plastic bags placed in the blue trays. At that time, no shops in Chembur were selling sliced vegetables. Suresh would call out to me “Chechi (sister) why don’t you try our Methi (fenugreek leaves) today? You will love it. “You have not taken papad this week. I have some fresh Kerala papad. Shall I give you a pack?”He knew every customer and their needs, and the personal attention he gave attracted us to his shop. He knew what to say and whom to please, as if those qualities were inborn in him. The number of buyers to the vegetable stall under the neem tree increased. Suresh would see to it that our basket was full of vegetables, and we were content by the time we left his open- air shop.

A year later, one fine day, I was taken aback when I did not see Suresh or Nagesh under the tree as usual. The whole place looked so desolate, and I wondered what had happened to them. Then I noticed the banner on the tree.“Vegetable shop shifted opposite Kohinoor
Hotel.” Even then, the two brothers knew how to advertise! I couldn’t believe my eyes when I hurried to their new location and saw the shop, which was by no means a small shop. It was the now well known A.P. Mani & Sons Supermarket!

This marked the beginning of another chapter in Suresh and Nagesh Nadar’s success story. Eventually, they got a contract to sell their vegetables at the Haiko Supermarket in Hiranandani Gardens, Powai. They employed one hundred people, and they shifted their residence from the chawl where they lived, to an upmarket apartment in Tilak Nagar. Today, A. P. Mani & Sons Pvt Ltd is a household name in Chembur and beyond.

Suresh says, “We got into tie-ups with a few caterers, who placed large orders with us daily. But we hit the jackpot in 1998 when we looked around and realised people in Mumbai were very short of time and that working people would be happy to carry home cleaned and sliced vegetables, after a hard day’s work. We followed the advice of a customer who suggested that we sell vegetables packed in plastic bags.” This was an instant hit, and was something unique for an ordinary vegetable seller under a tree.

One of the primary reasons for Suresh and Nagesh Nadar’s success is the fact that right from the beginning they were friendly, and communicated very well with all their customers. They had no ego, were eager to improve and get ahead, and were open to implementing their
customer’s suggestions.

One of Suresh’s loyal customers had gone to Singapore for her daughter’s delivery.  “She brought back a ready to cook, packaged vegetable-box as a sample to show me how I can improve my packaging and labelling,” Suresh explained.

By 2011, the company of A.P. Mani and sons had a good turnover.  Its gross revenue went up considerably because of their hard work and perseverance. Unbelievable but true. Since then, A.P. Mani & Sons has been growing by leaps and bounds. DY Patil University did a case study on the Entrepreneurship Management of AP Mani & Sons.

Suresh Nadar was elated when I told him, “Suresh you have been an inspiration to me. I have been following you from 1986, and I know how much of hard work has gone into this.” With the same smile and humility that characterised him from the time I first met him, he said “We have to work very hard even now to make our enterprise grow. We even have two supermarkets and two shops which sell produce at cheaper rates to help those people who can’t afford to shop at a supermarket.”

I asked him curiously “What do you believe is the reason for your success? His reply was prompt, “The blessing of our staff. There is no attrition in our company.” And this is correct -I do remember seeing all his staff since 1990. They have been loyal, sincere, and are seen
serving the customers with a smile, even today in 2O21. Suresh’s and Nagesh’s dream and focus is now on developing their e-marketing platform.
They have acquired wealth and success purely through their vision, passion, perseverance and extraordinary hard work. And they are still dreaming conquering of new pastures –including some further away from Chembur, where it all began… 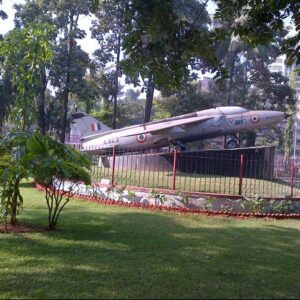 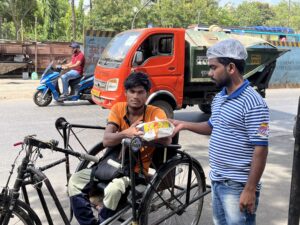 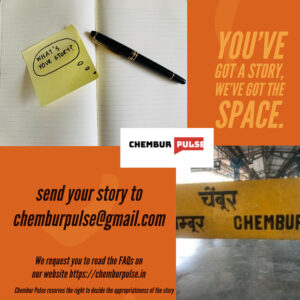